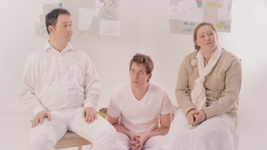 Saturday is a spoof documentary short chronicling the development of the first man by the metaphysical power house of creation design known as Heaven.

Saturday is a spoof documentary short film interviewing the angels that were part of the process in the development of Man.  Going from department to department and speaking to those who were involved in the project at the time, we hear what went wrong and why the metaphysical power house of creation design that is Heaven, ended up shelving the project.

There are now billions of human beings, alone in the universe.  Adam, the first man, was developed by Heaven, a metaphysical power house of innovation and design.  At the time of creation it was believed that mankind was to be the pinnacle of creation, but is now never mentioned in the upper dimensions.  What went wrong?

That quote sums up ‘Saturday’ for me.

It was a massive undertaking, however we had not set out with such high aspirations. This was to be a simple vox pops shot in my friend’s front room, with a white sheet draped over the back wall and our friends coming round to play out the constituent parts.

2 years later, over £4,000 and well over 30 peoples dedication and energy, we are happy to present you with ‘Saturday’, a Mockumentary about the failed ‘human project’.

I’m writing this statement as the ‘Director’, but truth be told this project was a collaboration from the start. Keif and Christian have each contributed to the vision and themes of ‘Saturday’ and played a big part in the finished article we have today. The more technical aspects of the role of director, both on and off set, were entrusted to me by Keif and Christian – for which I am eternally grateful. It gave me an opportunity to cut my teeth on a larger scale production then I’d ever had to helm. My biggest directorial challenge was simply the look. Trying to create a realistic feeling documentary style, while trying to stay true to the grammar of film and find the drama in a scene…those scenes often consisting of one or two people sitting down and chatting, did result in a few sleepless nights. Tone was always going to be critical to the success of this film.

We set out to make a comedy with a heart. We also wanted to make this a non-denominational project too. While alluding to different ideologies and religions, we never set out to make a film that ‘preached’. With two atheists and one religious person in the creative trio, we thought that the comedy should originate not from poking fun at religion but from the characters, their interactions and their eccentricities. This has always been more of a work place sitcom. The spiritual setting just helps carry our underlying theme.

For me, this is a story about Faith. The Faith of the team who put their best efforts into creating something, the love of the designers, Terry and Muriel, and of course the lack of faith from our villain of the piece, Gabriel (who, in himself is only a villain because of his distinct lack of faith). There’s a lot of comparisons to be brought from the story. It is definitely a film of the moment, at a time when our faith is at its lowest – for example, our faith in your government– it stands as an open metaphor for all.

A reason I love this film is due to the ending. Technical accomplishments aside, it really does polarise people as to how this film’s message is interpreted. Some would view this ending as a sad ending, conveying that we ARE all alone and that faith has little meaning or relevance now. I like to interpret the ending with a little more optimism; no matter how the things we build are knocked down, as long as there is still hope there is still purpose. The little girl praying at the end can be seen as a glimmer of hope.

The overall reason I love this project is that it’s accessible. If you want to spend 14 minutes with a light, charming short, a couple of jokes and some nice actors and settings then it’s all there. If you want to delve a little deeper, read into the tone and theme, hopefully have a more nourishing viewing experience then I hope that’s also there for you too.

Behind the Scenes Gallery