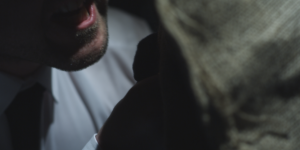 A tense and atmospheric crime thriller set in London’s murky gangster underworld, where a bound and gagged victim is brought to a dank basement to pay the ultimate price for his betrayal. With every word the tension builds, culminating in a bloody finale.

Shot in a highly stylistic manner and influenced by films such as ‘Le prophète’, ‘Gammora’ and ‘Shame’, Kith can be treated as an excerpt from a far wider story set in London’s murky gangster underworld.

This particular scene concerns a confrontation between a hired Hit-Man and his blindfolded Victim, brought out to a dank basement to pay the ultimate price for his betrayal.  As it unfolds and the he is dragged from the trunk of a car in the middle of the night, we find out that not all may be as straight-forward as it seems.

With every word the tension builds and we uncover more and more layers of this twisting narrative, culminating in a bloody finale.

Origin story for this film was simple.

Richard South and Phil Crosby had mused for a long time about the prospect of working together. After gathering a slate of several projects, funding pending, they needed something to keep their idle hands busy.

Richard came up with nice little story, set in the woods which involved a mysterious hit man and his hooded captive. The story was neat, had a great catch and gave an opportunity to make a very attractive short film. It is far better to tell a smaller part of a greater story then the other way around. If you can leave an audience interested in watching more, then you have accomplished your mission.

Production was to be helmed by Keif Gwinn and Catarina Viana, Phil’s regular collaborators. An additional producer role was made available which Oleg Ozoling eventually filled.

Oleg Ozoling had previously worked with Phil back when Phil was a Director of Photography. The two had formed a good working relationship and were eager to find another project to collaborate on. When ‘Kith’ came along, Oleg jumped at the chance to produce.

Very quickly, the practicalities of a shoot based on location in the woods became apparent – a night shoot requires arranged transportation for cast and crew to compensate for the lack of public transport, then there’s the concerns about lighting and generators, health and safety of working in the dark. Suffice to say the producers were keener on an ‘interior’ shoot which gave us the liberty of shooting in the day as well.

Aside from location, the project did not offer too many other difficulties. All the crew were incredible, Stephen Brocklehurst who played both roles really excelled not only in his performance but with the physical demands of the role as well. However biggest Kudos have to go to our Composer, Alex Norman. He not only delivered an epic score which sets an amazing tone for the film, but also played body double for Stephen. The shots of the body in boot or the hooded character getting beaten were all Alex.

It was little bits of extra effort like were displayed by Alex that really helped get this film made.

There was always a distinct vision with this project. We needed to make a strong, attractive project. This is to be one of our calling card projects.
There is an old adage in film that goes along the lines of “Get in late and leave early”. In terms of story, you cut in and out on action. This makes a story instantly captivating. We attempted to take this one step further and create a sequence from a much larger film, laced with just enough information to keep the audience intrigued but just short of enough information for them to formulate a typical plot, therefore creating the mystery as to the larger story. I think that’s why the quote feels so relevant, ‘you ain’t heard nothing yet’.

Due to this, we pushed the money and effort into the look of the film. The script itself was to be written as straight as normal. We wanted to avoid anything too convoluted in such a short film. Therefore we needed to push most of the story through the visuals. As a director, it’s always exciting to tackle scenes that are technically challenging and require the exposition to be shown and not heard through dialogue.

Little trinkets and hints are dropped throughout the film. My personal favourite would be the use of the toy rabbit from the rear view mirror in the opening sequences. The rabbit is a symbol of life, and thus conversely death but also a symbol of luck; a rabbits foot, usually. Another hint was the use of the ring on the hit-man’s finger (myself and Stephen Brocklehurst lovingly referred to this character as ‘Dexter’, after the character from the hit series). A ring suggests a bond, usually marital but generally a visual metaphor for a commitment, which we soon find out there is between the hit-man and his hooded captive.

Visually, myself and Joao tried to stray away from what wold be a typical shaky-cam style. We both agreed that locked off shots would help emphasise the clinical nature of the hit-man, how methodical he is. Particularly with the earlier shots, it justified itself to use quite intimate shots of details which helped illustrate his attention to the finer aspects of his job, hence inferring his skill and ability. This also gave us good reason to not show his face till the bloody reveal at the end. The lighting of the set was inspired by early German Expressionist cinema, the visual contrast suggesting the internal conflict of our hit-man.

The sound was always to be key. I called upon the talents of a school friend and also former band member, Alex Norman. His style is geared towards string based epic soundscapes, particularly suited toward productions with a little more action, however we both had a similar vision of how this was to be played. Alex’s score perfectly punctuates and even defines the pace of the film. In the early sequence, it creates such a beautiful and memorable opening. The slow and bassy strings that imply the sinister motives of the hit-man, and yet punctuated with occasional piano key progression that hints a connection between the two is revealed in our bloody reveal at the end.