Will you be going to the cinema in the next week? The answer might (not) surprise you…

+   Written by the march of capitalism

+   Starring You, the viewing public

+   Hopefully just less than the next toilet break

Keif muses on the London cinema experiences he’s had over the last few years, and a surprising truth from the data. Part rant, part call to arms. Make of it what you will…

I’m a member of the polling group YouGov as I’ve always taken an interest in where the data that’s used news reports came from.

I’ve also been taking part in the YouGov Co Producers project, where a film is being created with 90,000 co-producers who help shape the film through the use of aggregated data. It’s shaping up to be quite an interesting project, with the returns also coming back to the co-producers if it makes any money.

So I had answered one of the recent questionnaires, and I saw that they had a quick fire poll for movie buzz data about the upcoming releases, which you can check out on http://yougov.co.uk/news/2014/01/24/weekend-movie-buzz-action-top-chart/. One of the questions asked was, ‘Will you be going to the cinema in the next week?’ to which the answer was surprising. 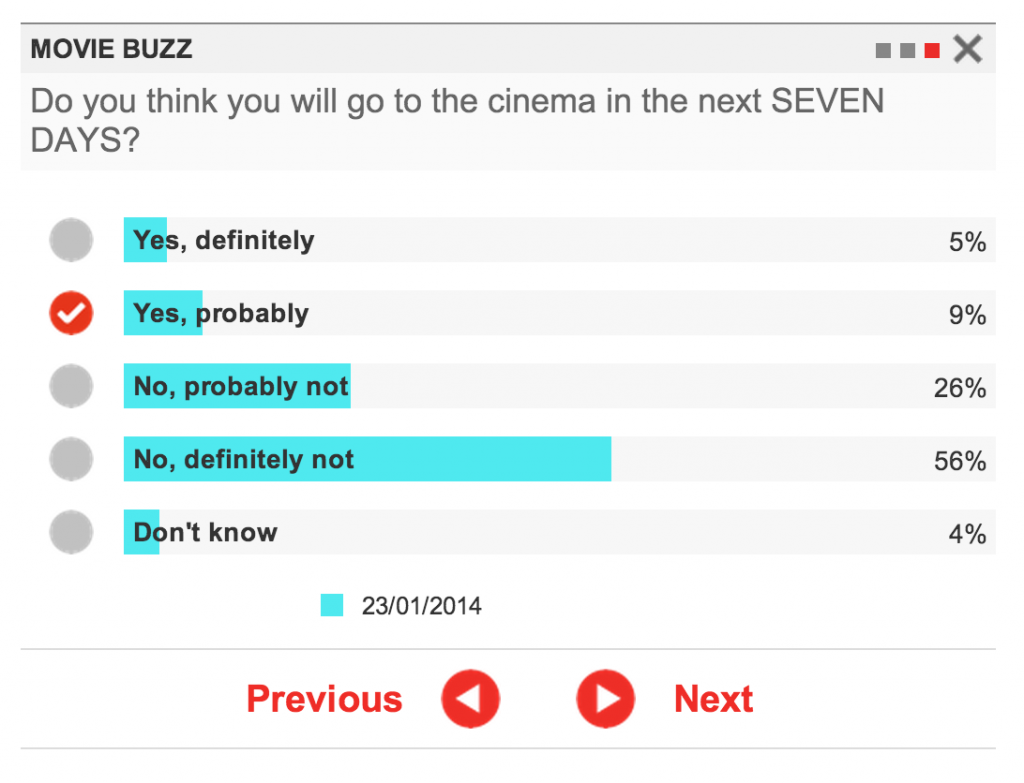 Will you be going to the cinema in the next week? from YouGov website

Over half of all polled would state that they would definitely not be going to the cinema in the next 7 days.

Why is this so surprising to me? Because I thought I wasn’t the majority, I really enjoy films and the cinema experience of high quality large screens and loud sound that can really take you into a movie. I love it. I just don’t do it very often, but I had the general feeling that there were plenty of other people going all the time.

Then I remembered, I don’t like the smell of stale popcorn, seats that crush my knees, or stepping in the sticky of the last screenings sugary post-mix. I don’t enjoy the ripped screens (seriously, Cineworld Wandsworth you need to take a good long look at yourself in the mirror) or the booking fees or the curiously deadened feeling of a three quarter empty screening of a film that has been out for several weeks.

Over the last couple of months however, I’ve been having a different cinema experience courtesy of the Ritzy in Brixton.. Screen one (which I saw both ’12 Years A Slave’ and ‘Inside Llewyn Davis’ which Phil has reviewed) has large comfortable seats, they were packed out screenings which added to the buzz as well as the sensible policy to sell full bottles of wine at not a huge mark up on pub prices. I appreciated their ticketing system, which was fast and efficient (unlike odeons which always wants to lock up the seats in such a way you can block yourself out of the seats you want if you have to back out and go back in due to last minute changes in numbers) with it as simple as showing my phone at the door to get in. It’s actually been a really enjoyable experience, far more than Anchorman 2 at the Cineworld Shaftsbury had been.

What does this mean for us as film makers? What can we do to ensure that films are seen in the way that they are best enjoyed, a full dark room of interested people? We need to support the kind of cinemas that provide this kind of service. HMV Curzon in Wimbledon has a similar level of service and I can highly recommend the Picturehouse Ritzy. We need to give feedback to the major chains and let them know that we expect more.

We expect not to have to sit through a random amount of advertising so you’re never sure when the film is really going to start. I’m already in the cinema supporting the theatrical run, so I don’t need 25 minutes of adverts I can see on television and guilt-trip films about piracy.

We should be pushing them to support short films prior to the big pictures. We should be pushing advertisers to support unique short form advertising features, which helps new film makers out with experience and cash, and gives the viewing public a unique experience in the cinemas. By mixing up pure narrative short films, along with advertainment then there will be more engagement from the viewers and so a better return for the advertisers for far less than a traditional advert.

What do you think? Come and chat about it with us on Facebook at https://facebook.com/SketchInStudios