07 Feb 2014, Posted by Phil Crosby in Crossing The Line, General

Oscar Isaac is certainly is a revelation, there’s laughs to be had and there’s also a cat. Everyone loves cats. Don’t expect too much in the way of story, and there are certainly some issues with the pace, but this is an enjoyable instalment from the Coen Brothers.

Another entry in the Coen Brother’s canon, ‘Inside Llewyn Davis’ does not feel like a traditional Joel and Ethan adventure. Instead of a tale, verging on the surreal, we instead follow the all too familiar misfortunes of a struggling artist, Llewyn Davis (Oscar Isaac) who must endure in order to achieve his goal of the illusive record deal.

Before we begin, it has to be said that Oscar Isaac is a revelation. Portraying our sofa hopping sponger, Isaac manages to straddle the line between charming rogue and alienating creep giving us a very challenging and yet rewarding central character. His battle with responsibility and consequence can be at times utterly engaging, and at others revolting. Ultimately he is flawed but utterly relatable with it; a genuine performance. Oh, and boy can that guy sing! If he’s still looking for a sofa, I have a reasonable sofa bed going…and a guitar…he’ll have to lose the cat though. 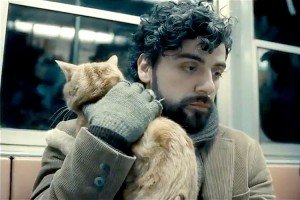 So, aside from Oscar Isaac chewing up every little bit of the scenery, I’ll be the first to admit this never really grabbed me as a film I was going to love. I’m not a Coen-ite/Coen-ian/Coen-ista, I’ve enjoyed a few of their previous instalments, but as a whole find their work sometimes meandering or inaccessible.

I will admit that this film at times lives up to my expectations. There are certain lulls and the film does lose its pace, certainly towards the end of the second act when Isaac heads out on the road for Chicago; did have to resist the urge to catch 40 winks at this point.

However I can’t help but fall for this film, there is a certain romanticism about Llewyn Davis’ melancholic brand of Folk that you can’t help but buy into. I’m certainly not familiar too much with New York in the 50’s nor the Folk genre (aside from the odd Bob Dylan track) but the subtleties in the set design mean you get a more genuine and rustic feel for the period. Rather than the Retro Modern overload we were exposed to in ‘A Serious Man’, we’re instead enticed into this film; this realistically could be any dive music bar in Shoreditch. With the delicate use of detail in the set design and wardrobe, it becomes a lot easier to settle into the film and thus invest in the stories and characters.

By far the most surprising element of this film for me was the comedy. I was prepared for a far more serious episode from the Coens, but was treated to some comedy Gold. Part of this is down to the superb cameo performances. A big nod should go to Mr Timberlake who manages to deliver a rather self-parodying portrayal of a fame hungry Pop wannabe (oh, those sly Coens), turning in one of the greatest jokes in the whole film – check it out below.

This film should be on your watch list for this year, especially if you’re a lover of the Brothers of Coen. Enjoy it for what it is, there’s a couple of great cameos, a fantastic central performance from Oscar Isaac and enough entertainment to justify the ticket price. I will admit this isn’t a classic or even to the very high standard we have come to expect of the Coens, but where it succeeds is in the subtleties and genuine delivery. It’s well crafted, and worth the ticket price alone to hear some beautiful folk music sung by some ever better talent.

On a side note…is that LEE VAN CLEEF?

Seriously, beginning of the film, is that ‘Angel Eyes’ himself?

Answers on the back of a postcard…or comment, or whatever…

Well, it’s really all about the pacing.

Yeah, so, now that’s out of the way, the film starts and ends with a great momentum. Everything slots in together perfectly. In fact, you don’t even notice how perfectly until you see the end! The beginning end same scene, used to show the cyclical nature of consequence because of his inability to accept responsibility? Genius!

I guess this is more review stuff…ahem.

What I mean to say, is as soon as we see John Goodman, the film seems to move as fast as his junkie thighs do! Now, I get that this is supposed to represent Llewyn’s long and hard journey to get to his Mecca (getting his recording contract), but honestly, it’s painful. Whatever else is going on simply doesn’t need to be there. It could be half the length. It is a shame as it totally dropped my review by a full point!

So, simple fix, keep up the pace that we originally set and get Llewyn to and back from Chicago in the amount of time it takes John Goodman to make one of his ‘bathroom breaks’.

Aside from this? Not too much. I appreciate Llewyn Davis may be a divisive character. Some may say he seems to unlikeable but I think he’s a perfect representation of a frustrated man before his time.