21 May 2014, Posted by Phil Crosby in Crossing The Line, General

What’s that coming over the hill, is it the Director of “Monsters”?…

…I apologise to all those that can understand that reference, it was a moment of weakness.

Gareth Edwards invades our cinemas with another monster romp, this time in the form of screen legend “Godzilla”. This particular incarnation of the mega lizard battle royale is more in keeping with the original Japanese series than the more recent popcorn schlock in 1998, curled out by the one and only Roland Emmerich.

If you’re not familiar with Gareth Edwards “Monsters” then, let me give you a brief summary. Two unscripted people walk around looking at Gareth Edwards excellent CGI. It’s an incredible film given its budget and restrictions and is a visual achievement, however lacks any humanity (which should be perfect in a flick called “Monsters”). A lot of the same could also be said for “Godzilla”.

The budget is all on the screen in this epic monster outing. It is a technical accomplishment, not just in visual effects – hand crafted by no less than 762 VFX crew members and 6 months of work alone to animate and texture Godzilla’s scales – but also in the practical (set design, costume) and shot choices. 98 separate sets were created specifically for this film, a huge undertaking.

The action, when at its best is breath taking. The sheer scale of the action and the use of shot choice to give perspective from the ant-like citizens of whatever city Godzilla is haphazardly trying to save really create a sense of jeopardy and destruction that has been severely lacking in comparatively cartoonish counterparts “Cloverfield” or “Pacific Rim”.

However I don’t think Edwards has particularly matured in his direction of real people. He’s attempted to create a thinking man’s story about a gigantic lizard that goes toe to toe with a couple of radioactive moths. It’s hardly going to work as an allegory for anything other than “importance of pest control”. The movies contemplative pacing (so we can see Ken Watanabe look confused in even more meetings) forfeits any excitement and allows us to evaluate the entirely nonsensical plot as it unfolds. Honestly, if Ken Watanabe’s Dad died in Hiroshima, how did he give him the watch? Also…wouldn’t that make Ken over 70 years old?!

He should really be called Ken “What”anabe

Yet, instead of an unadulterated monster brawl, we’re trampled with evocative imagery of every recent natural disaster (Fukushima, Indian Ocean Tsunami, Haiti etc) and emotional arcs so dull you are left yearning for a gigantic lizard to rip through the very same cinema you’re in.

Ultimately, this movie succeeds in everything it needs to do, but to have a monster flick that delivers the monster for a measly screen time (approx. 15 mins) in favour of a hammy human centric story will leave you feeling a little short changed. In a movie called Godzilla, it’s no mystery who the protagonist should be.

Simple. Make the Godzilla movie about Godzilla. Now, I’m not being plebbish and merely calling for more “awesome” in spite of story. I would simply drop all of the story arc for Aaron Taylor Johnson. 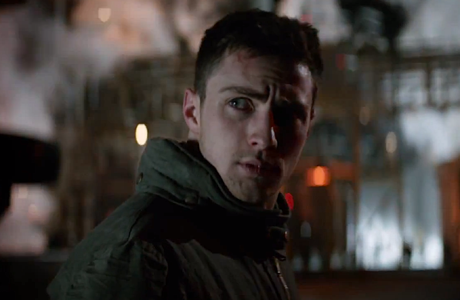 He is anything BUT kick ass in this particular flick

His narrative arc is so poorly constructed that he simply bundles his way through the story with no particular motivations aside from “Oh, I need to be here now”, simply to justify being present where the next possible action will be. A story of coincidence is the lowest form of screen writing.

Let’s also drop all those horrific clichés, for example, pop quiz:
(1) Elizabeth Olsen (Martha Marcy May Marlene, Liberal Arts) plays the wife of a soldier (Aaron Taylor Johnson) in the new hit movie “Godzilla”. Guess what her characters profession is?
a. Congress Woman
b. Scientist
c. NURSE
d. Soldier
Honestly, if I see another focal character who’s a nurse in another disaster picture I may well have to have a Godzilla style rampage through the WGA!

I appreciate she’s just dumped in the streets to be our point of empathy on the ground, but for crying out loud give her a little more involvement in the story.

Finally, I’m not in the shape of my life but corr blimey Godzilla, you’ve certainly let yourself go! There was an overwhelming temptation to refer to him as “Bubble Buttzilla” as he lethargically waddled round the East Coast. As he’s being “fixed in post” anyway, let’s shed a few million pounds off him, eh?

1,000 hours on fixing and rendering Godzillas junk in his trunk.

8,997 hours for me to try and give a hoot about anything Aaron Taylor-Johnson says or does.