Blacklist: Once a source of shame for the movie industry, this originally referred to actors and directors shunned by Hollywood during the heights of McCarthyism in the 1950s for alleged ties to Communism. Now, however, it refers to the annual “blacklist”, an insider survey that compiles the year’s (allegedly) best unproduced screenplays. It’s resulted in The King’s Speech, Argo, and… Cop Out.

Rhubarb: Background conversation by extras. So-called because extras were often asked to mutter the word “rhubarb” to produce the effect of genuine conversation, with their mouths moving convincingly. Also known as “walla”.

Alan Smithee: A notorious pseudonym used by directors unwilling to have their own name slapped on a film when they weren’t happy with the final cut. After the ironic calamity that was Burn Hollywood Burn, a film about the practice that was itself eventually credited to one Alan Smithee, it’s been retired.

Champagne Roll: Usually at 100 film rolls, or sometimes 100 hard-drive downloads on a digital shoot, into a shoot, the cast and crew get a celebratory glass of champagne. Hooray!

Honeywagons: Portaloos to you and me.

These are but a few of the terms that Empire Magazine have collated for their latest ‘Film Studies 101’ blog (check it out here).

Interestingly, I’ve noticed there are a few that have entered general conversation, such as ‘wrap’ and ‘dolly’ that I’ve heard used in their filmic context but for describing other things.

Obviously there are a few terms missing, however one which always amused me from my days on set was actually a name for a piece of kit – “The F**K OFF’ stand. 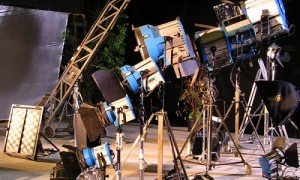 Do NOT type ‘F**K OFF’ stand into Bing, you get some very dark results…

Yep, see that thing on the far right with the STONKINGLY huge 20 kw Studio Light on it? That thing that is currently supporting ~45kg  of hot, electrified glass and metal? That’s huge shining single steel pole is a ‘F**K OFF* stand. It weighs so much that it requires a minimum of 3 men to move, lift and also mind. The light’s that go on these stands are so heavy, they are attached with the stand lying on the floor and then have to be hoisted up – almost evocative of Flags of our Fathers Mount Suribachi heroics.

It is a beast. Without this stand, you wouldn’t have any night shoots at all. This stand hold lamps that are used to replicate MOONLIGHT for crying out loud. Even the Moon isn’t as good as the lamps this bad boy is holding!

Because when anyone asks you to move it, you tell them to ‘F**K OFF’!