27 Jan 2014, Posted by Phil Crosby in Crossing The Line, General

+   Written by Will Ferrell, Adam McKay

This film certainly deserves a viewing if you’re a fan of the original. But unlike the original, you may not be revisiting this one as quickly.

Well, it happened. Who could have foreseen an Anchorman sequel?

Apparently a lot of people…

The McKay/Ferrell formula is certainly a potent one. They’re not the Comedy Box Office draw of an ‘Adam Sandler’ (over $2 billion total box office…go figure) but what they don’t have in ticket takings they certainly make up for in their ‘penetration’ of Pop Culture – see ‘Step Brothers’, ‘The Other Guys’, ‘The Campaign’ and even FunnyorDie.com.

Our first outing with the Channel 4 News Team (no, not Jon Snow or Krishnan Guru-Murthy) provided us with dangerously quotable quips, a host of memorable shenanigans and also a perfect assemblage of famous faces gifting us with enough t-shirt fodder to last a generation of movie goers. 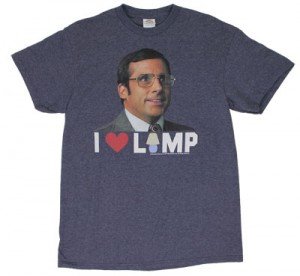 “Move over Che Guevara, there’s a new King in town”

…and that should have been the end of Anchorman’s gift to the world.

Alas, we welcome back Mr. Burgundy and his cohort for another raucous adventure. Still helmed by the winning McKay/Ferrell team, with production in the ever reliable hands of Judd Apatow – current King of American Comedy – there shouldn’t have been much reason for worry…

On the most superficial level this film has all the attributes of a funny film. In its defence it can be said that the film ends of a far better note than it starts.  The second half will certainly earn this film its reputation and is definitely more in line with the McKay/Ferrell winning formula.

However, if this film was to be judged solely on its own merit, it probably wouldn’t make the cut. Its dependency on its predecessor only reminds you of how brilliant the first film was. A lot of rehashed jokes, some turned all the way up to 11 (beware Steve Carrell’s whole performance). Because of this, the jokes simply don’t land as nicely as they did with that first watch of ‘Anchorman’ . 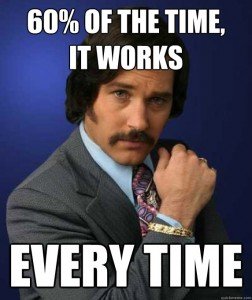 There are of course always exceptions – the return of the cameo-riddled News Team Battle Royale is in this case, biggerer and betterer. There’s also some new jokes and japes to be had and there are also some stand out performances. Paul Rudd obliges us with a bit more bang for our buck. He definitely stands out in this film and if anything builds upon his rather simple role from the first film to give us a more exciting and funny Brian Fontana.

The same can’t be said for Ferrell and the rest of the crew. For the most part, the cast end up being simple caricatures of their original namesakes. One particularly painful performance, turned in by Christina Applegate, feels less like the sassy Femenista of the first film and more like a toothless and rather forgettable piece of the furniture (yes, Mahogany furniture…oooh, and are those many leather bound books?).

See it, bear with the first act and then be rewarded with a nice homage to first films glory!

For me, fairly easy.

I think the problems with this film all stem from the script. The proof is to be found from the first film.

This film tends to wander a little. It’s obvious that the script is very open to the improvised comedy stylings the cast are usually afforded. It’s fair, some classic comedy has spurred from unscripted moments. But when an entire film hinges on this, it means the comedy is fairly removed from the action. Jokes just descend into a concoction of random words to get a quick chuckle.

However, if we look at Anchorman, it’s not as much the dialogue that motivates the comedy but the action. The rainbow unicorn sequence for example, the Jazz flute, the Baxter-punt – heck, the greatest barber shop quartet set piece that forced ‘Afternoon Delight’ onto all our iPods – these were all classic (and scripted) moments.

A little more work on the script, maybe a little less dependency on the original film and certainly some stronger performances from the likes of Applegate and Carrell would do this film a world of good.

EDIT:  At point of writing this, I quickly perused my ‘Social Media’ feed and came across this little gem…