15 Feb 2014, Posted by Phil Crosby in Crossing The Line, General

A fun romp with great characters and set against a beautiful, rich canvas. May be a little dry for some tastes but certainly worth a watch and a definite Oscar contender.

…is basically how I intended to publish our latest review for ‘American Hustle’.

When walking out the cinema, post-screening, a friend of mine turned to me and said “I pity anyone who has to write a review for that film”.

However, he’s right. This is like windy, bendy, twisty, turny, outy, inny film. There is no way I could even begin to talk to you about anything plot. All I can say is that there is a lot of humour to this ‘based on true event’ yarn, more so than I expected. Especially good to see someone like Christian Bale turn provider of a chunk of the laughs. 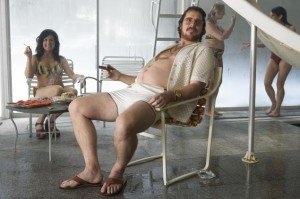 They often say the bigger ones are more jolly…

When we examine this films technical achievements, the obvious stand out is the set design and wardrobe. Certainly after the opening 5 minutes I fully expected to see Goldie Hawn saunter on and maybe even Burt Reynolds (‘Smokey and the Bandit’ Reynolds, obviously) to pop by. The real success though was provided by Linus Sandgren with the cinematography. This film felt 70’s through and through and that is down to the shot choices and use of camera movements.

David O. Russell is a big fan of the hand held shaky cam, usually fitting the realism of his films such as The Fighter and Silver Linings Playbook. However, a first time collaboration with Linus Sindgren has I believe broadened Russell’s appreciation of the subtleties of camera moves. By ‘locking off’ (Film speak for keeping camera still, derives from when you have your camera mounted on a tripod and you ‘lock off’ all vertices of movement) the frame, particularly in the opening, sometimes interspersed with the odd Dolly or Track, Russell and Sindgren create a film experience that’s highly evocative of the earlier 70’s classics. 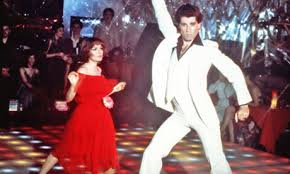 This gives a perfect canvas for Russell to excel where he is best – directing actors. Yet again, we have a stellar line up and some great and engaging performances, none more so than that of Jeremy Renner. Also nice to see Mr. Renner get his acting chops around something with a little more substance than, say, Hansel & Gretel: Witch Hunters.

Well, this film ticks over nicely, hits all the marks. I do feel that there was certainly one point for improvement.
Amy Adams English accent…oh my, let’s get rid of that badboy, shall we? HOW DID ANYONE FALL FOR THIS ACCENT?! You’re a con artist, which means using tricks to gain confidence to then lead to the heist. Personally, it really grated and did detract from the rest of an otherwise strong performance from Amy Adams who managed to straddle the line between strong female lead and sex icon.