01 Feb 2014, Posted by Phil Crosby in Crossing The Line, General

+   Written by John Ridley, based on Solomon Northrup original

A raw and uncompromising account of slavery, told through the eyes of a relatable protagonist Solomon Northrup (Chiwetel Ejiofor) who has slavery thrust upon him. The acting will receive most plaudits and rightly so, but this film is also a technical achievement so do keep your eyes (and ears) out.

There is little reason for doubt when you have such a talented artist as Steve McQueen in creative control.

Turner Prize winner McQueen has always made provocative work that looks to push to a larger audience the stories we as a society often struggle to tell. His art project “Queen and Country” bares many similarities with the effect and tone of 12 Years a Slave. Both are handled with the utmost respect for their subject matter, McQueen personally dealing with the families of the deceased to choose the photos for “Queen and Country”; it creates such a powerful message with a rather simple canvas. Both also feel like extraordinary tales of sacrifice that are deliberately told in ordinary and almost matter of fact way to humanize the loss.

12 Years a Slave recounts the true story of Solomon Northrup (Chiwetel Ejiofor), a free African American living during the wretched times of slavery. While never shown, Solomon, a free man stricken of his status, property and family is thrust into shackles and sold into slavery where he endures many masters and their disparate ways of supervising their indentured work force.

This is a raw and at times brutal recollection of events, however it is all entirely necessary. This film will be Oscar bound; at time of writing this article, it has already cleaned up at the Golden Globes. I do however feel that this film will not receive the praise it should. It is an intelligent and involving film, entirely gauged to become immersive whilst also telling the true story of slavery. 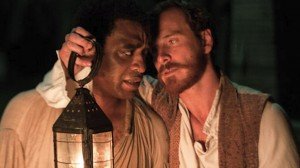 Chiwetel Ejiofor receiving some not so inspiring words from Michael Fassbender

I will say it right off the bat, Solomon Northrup is our key to engagement with this movie. As Solomon is dragged through the rest of his trials and tribulations, we see him evolve not into a hero but a mirror for the rest of the barbarity that is committed around him. This is a standard cinema technique referred to as ‘Mirroring’, these supporting actors will give you your cue for the emotion you should be feeling whereas the lead is there to be the focal point of the narrative and motion of the film; a stoic and strong protagonist who wades through the worst of atrocities and proceeds unflinching.

This is part of McQueen’s brilliance. McQueen never looks to cut away from the punishment exacted upon the slaves which pushes the audience to soak in every lash. In fact he reinforces the everyday nature of such acts of violence by having a lot of these committed to the background, out of focus – these acts happen regardless and so the foreground action will continue.

We are cajoled along with Solomon into the slavery experience, while actually only being a tourist as Solomon is. We are aware from the beginning that Solomon is freed and that he has his happy ending, much as we do as an audience – the film finishes and we head home to our creature comforts. Yet how is it possible to walk away though from such horrors as we’ve experienced? This to me is why McQueen has done a masterful job with such a sensitive subject – a job I feel has not been matched with previous films of the same subject.

Another question, all too often lost in the caricature of 19th century America, is that of the enforcers of slavery and how such a system of cruelty existed for so many years? 12 Years a Slave succeeds where other slavery films failed to understand the machinations of the Slave Trade. While some will see Ford (Benedict Cumberbatch) turn in this film as the more sympathetic human face of Slavers, it is also indicative of the financial constrictions that resulted in his dependency on slaves – his ‘debt’ to Freeman (Paul Giamatti). Even the REAL Solomon Northrup recounted how Ford was a victim of circumstance –

“The influences and associations that had always surrounded him, blinded him to the inherent wrong at the bottom of the system of Slavery…were all men such as he, Slavery would be deprived of more than half its bitterness”.

We even have other slaves turn their backs while their comrades are beaten to a pulp for unsatisfactory yields of cotton. Everyone, no matter whether they hold the whip or not feel it’s lash are impotent, unable to change the course of such cruelty. Only cogs in a machine.

To look at the other stronger aspects of McQueen’s latest, I found this film a technical marvel. It is visually a rich film, Sean Bobbit (Shame, Hunger) collaborating again with McQueen to capture the picturesque setting where such awful acts are committed. At points, the screen looks like it could be painted John Frederick Kensett. 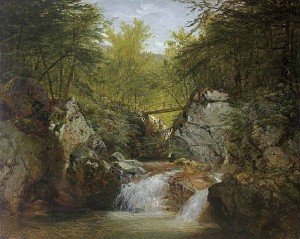 However it is the work of the foley team who really steal the show – Foley is the use of sound designers to create real world noise effects in post production. Foley is used highly at the start of the film in order to engage us and involve us in the story. The almost other-world sounds of wood crunching and old door handles creaking is pushed unusually high up in the audio mix. These sounds flood us and help us to accept the visuals and also helps with building the world quickly. It is by far the cleverest use of foley I have…resist urge to say ‘seen’…heard and just goes to show McQueen’s attention to detail that makes this movie so enveloping. For another great example, check out the opening sequence of ‘Se7en’.

You should watch this film. It is important. It can act as a lesson for where we are now. Whilst we look at this film and it’s events as ‘of another time’, it’s message is still resonant today – “Laws change. Social systems crumble. Universal truths are constant.” In the UK, we’ve had our own battles for equality with gay marriage, the same is true in Russia with the anti-propaganda laws. This film should stand as a parable to the evils of inequality.

Well, there’s not too many ways to improve this movie, if at all. To be honest, the points I’ll make are tending towards nagging, but they did not sit too well with me.

Both points are taking into account the amount of ‘Hollywood’ that has crept into this film. Sure, some clichés here and there are fine, some writing by the numbers is ok, and even some pandering to the audience is tolerable. However this is a strong film with an important message about universal truths and equality, it’s not exactly a popcorn film about Giant Robots and Monsters.

First, Brad Pitt. Yes, well done, you’re a Producer of the movie. Do you also have to be there saviour of Solomon too? It’s also a tiny bit ham fisted to have him dressed as Jesus. I get it, Brad has more than likely bought this role, in real life he’s an advocate for equality, but he’s also a huge A list mega star. I think it robs the meaning of the character. For me, this role should be played by an absolute nobody. This character is supposed to represent the ideals that everybody holds; the sway of public opinion is against slavery and thus things are to change. Surely it is more poignant to have this message delivered by an absolute nobody rather than Brad Pitt/Jesus? 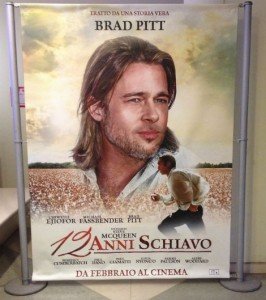 This is an actual Italian Poster…Oh dear Brad Pitt

Second, the ending. This is less of an issue, but again we are exposed to things we can largely predict or do not need to be shown. After Brad Pitt agrees to send the letters, we are then presented with a long uninterrupted close up of Chiwetel Ejiofor surveying the plantation. It suggests not only the passage of time, and his patience for the impending arrival of his friends to free him, but there is a moment where he also stares down the lens. This is traditionally film faux pas, as it instantly breaks ‘the fourth wall’ and reminds the audience they are watching a film. However, for me, I read this as a perfect moment – it really drives home the themes of the film, that slavery was prevalent not because of the evil people who perpetrated it but because of the people who were complacent to stop it. It also serves to reinforce his role as surrogate for the audience, all that he has experienced, you have experienced. I would have ended the film here, on Chiwetel Ejiofor staring down the lens.

Everything else is implied. We even have the post script which goes on to describe the events subsequent to the film. There is no reason to show Solomon being saved and returned to his Family; these are the Hollywood touches, these are the moments that are designed to create the tear-jerker moments. So rather than having the poignant ending that supports the theme of the film, we end on a more audience friendly shot of his family together, reunited. I won’t discount the emotion of this scene, it certainly caught me out (thank God for Kleenex), however it is not necessary in my opinion.

Maybe that’s because I’m dead inside, who knows.